Introduction: Ankle fractures account for 10% of all fractures and are the most common lower limb injuries encountered by orthopedicians, with an incidence of 137/lakh/year. Improperly treated fractures result in long-term pain, instability, secondary arthritis, psychological, and social consequences. Therefore, a proper understanding of anatomy, mechanism of injury, radiographic interpretation forms the basis of a good outcome. Fractures treated with open reduction and internal fixation (ORIF) using the AO principles will have a good functional and radiological outcome. This study aimed to evaluate the ankle fractures treated with ORIF by Baird and Jackson scoring system.

Material and methods: In this prospective study, 30 patients were classified according to Lauge-Hansen classification and underwent ORIF following AO principles from January 2019 to May 2020. Each patient was followed up for 6 months and an assessment of the outcome was done.

Results: Out of 30 patients treated, overall excellent to good outcomes were obtained in 18 patients. The results were fair in six and poor in six patients. No statistical significance was noted between age, sex, mode of injury, and different method of fixation with regard to functional outcome. ORIF 48 hours after injury led to clinically significant outcomes. Overall, the meantime of the fracture union was 11.13 weeks. Statistical significance was seen in functional outcomes with regard to fracture union with a p-value of 0.001. Three patients developed complications in our study, surgical site infection in two patients and hardware irritation in one patient.

Conclusion: Anatomical reduction and stable fixation are essential to maintain articular congruity in weight-bearing joints like the ankle. Short-term delay in surgery gave a favorable outcome in our series. Earlier the fracture union better the functional outcome.

Injuries to the lower limbs especially ankle fractures are a burden to society due to their high incidence, morbidity, and mortality. It is represented by fracture of the distal part of the tibia and fibula, to be specified fracture of medial and posterior malleolus of the tibia and lateral malleolus of the distal fibula. It results from excessive strain or sharp twists or direct blunt trauma over the ankle and is associated with subluxation and dislocation of the talus.1 Ankle fracture accounts for 10% of all fractures with an incidence of around 137 per lakh per year making it the second most common lower limb fracture.2 Lauge-Hansen classified ankle fracture that was accepted widely.3 Later, Danis-Weber classified ankle injuries based on the level of fibula fracture in relation to the inferior tibiofibular syndesmosis.4 The primary goal of treatment should be the restoration of the anatomy and function of the ankle joint. Fracture treated with ORIF using the AO principles has a good functional and radiological outcome. This study aimed to evaluate the ankle fractures treated with open reduction and internal fixation (ORIF) by Baird and Jackson scoring system.5

This prospective observational study was done in the Department of Orthopaedics at Mahatma Gandhi Medical College and Research Institute from January 2019 to May 2020. Forty patients presented to our department with a displaced ankle fracture, in which two patients had grade II and IIIA open fractures, three patients had ipsilateral lower limb fractures (one femur, two tibia) three patients have associated Charcot arthropathy, one patient had a head injury and one patient was associated with a spine injury. The remaining 30 patients were included in our study and followed up for 6 months. Ten patients underwent surgery within 48 hours and rest after 48 hours from the time of presentation due to various reasons. The surgery was performed by the admitting duty consultants.

The lateral malleolus was approached by direct lateral approach in 20 patients and by posterolateral in nine patients who had associated posterior malleolus fracture. The fibula was fixed with a one-third tubular plate, an anatomical locking compression plate (LCP), or an intramedullary device.

The medial malleolus was approached by an anteromedial approach and fixed with either partial threaded cancellous screw, K-wire, plate, tension band wiring (TBW), or a combination based on the fracture pattern.

Posterior malleolus and syndesmotic injury were assessed intraoperatively after fibula fixation. Displacement of more than 2 mm and unstable posterior malleolus was fixed with buttress plate or with partial threaded cancellous screws. Syndesmotic fixation was achieved with a fully threaded cortical screw.

The standard postoperative protocol was followed up, the ankle joint was immobilized with a below-knee slab for 6 weeks and radiographs were taken to assess the fracture reduction. On follow-up at 8, 16, and 24 weeks, radiographs were obtained. The patient was assessed for the clinical and radiological assessment using Baird and Jackson ankle scoring system (Fig. 1). The patient was allowed progressive weight-bearing based on the sign of fracture union. 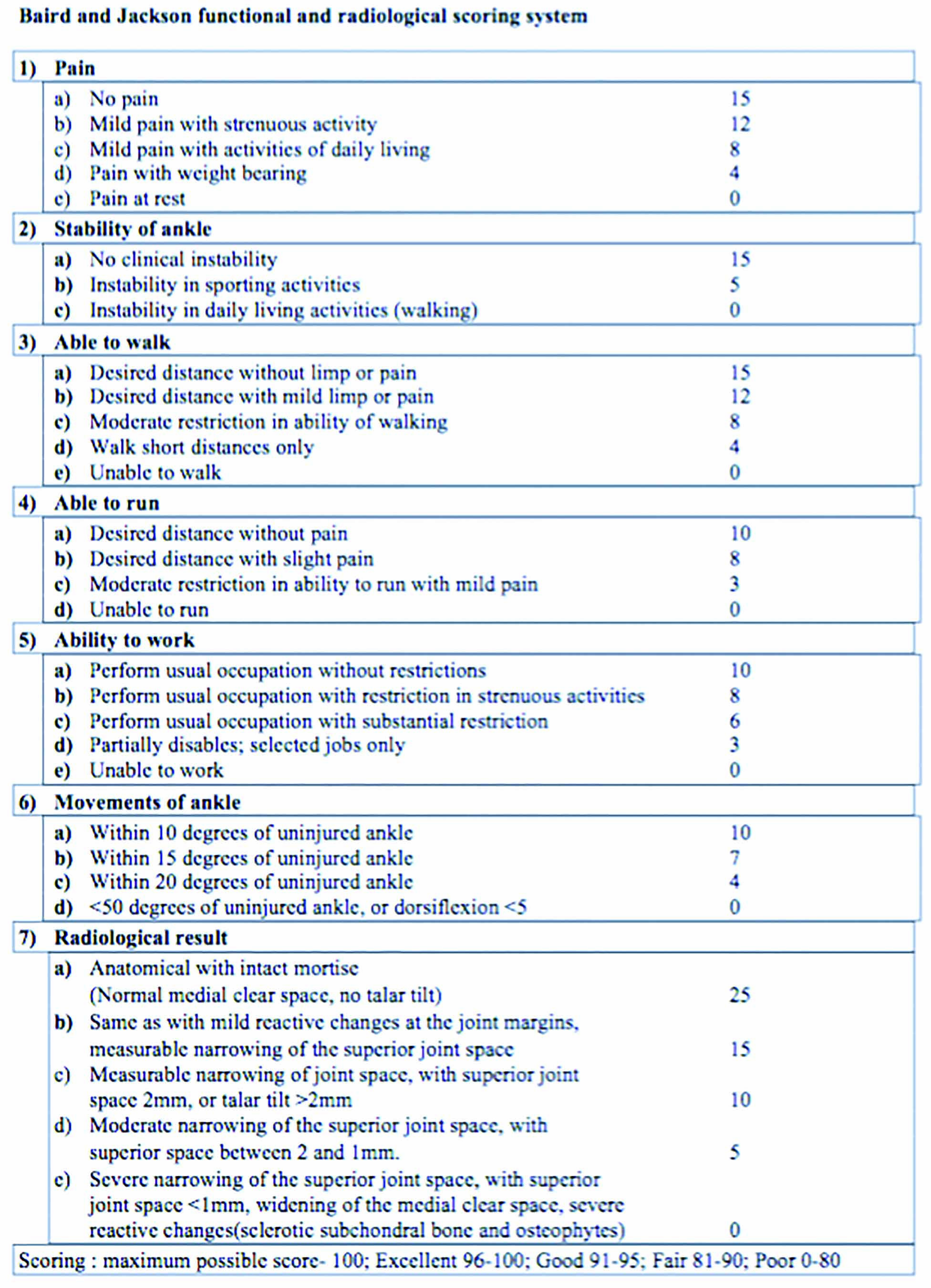 The data were analyzed with Statistical Package for Social Science (SPSS) for window 16.0 (SPSS, INC. Chicago, Illinois). Confidence intervals were set at 95% and values of p < 0.05 were interpreted as statistically significant. Data were summarized as mean and standard deviation for quantitative variables and frequency and percentage for qualitative variables. Chi-square and t-test were applied to compare Baird and Jackson ankle scoring system with categorical and quantitative data, respectively.

In our series of 30 patients with an ankle fracture, the mean age was 49.63 years and the majority of the cases belonged to 41–50 years of age group. Demographic data regarding age distribution, gender, side involvement, the mode in injury, and fracture pattern are shown in Table 1. Eighteen (60%) patients achieved excellent to good outcomes (Fig. 2), six (20%) patients had fair and six (20%) had poor results (Fig. 3) according to Baird Jackson scoring system at 6 months follow up. 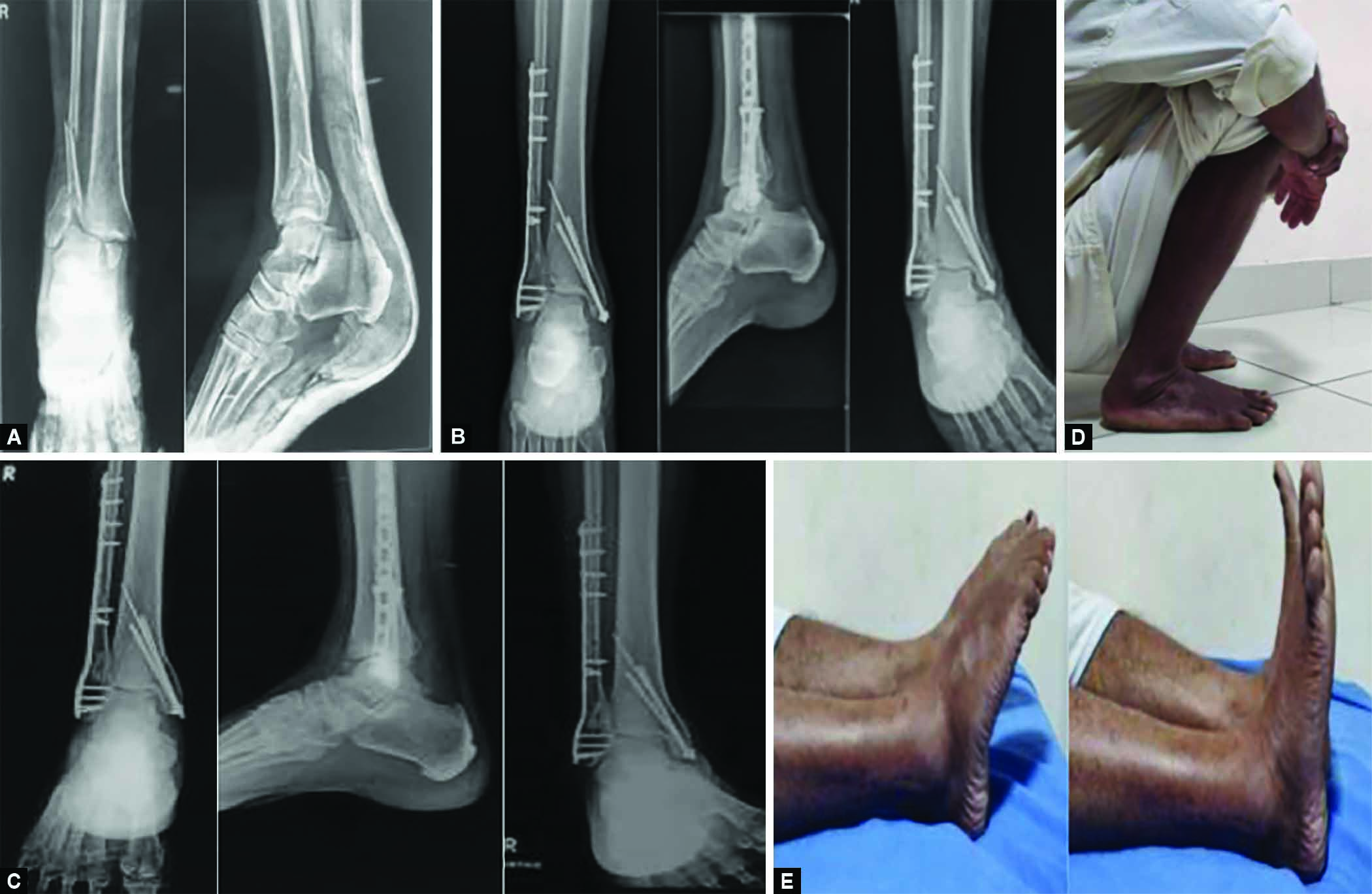 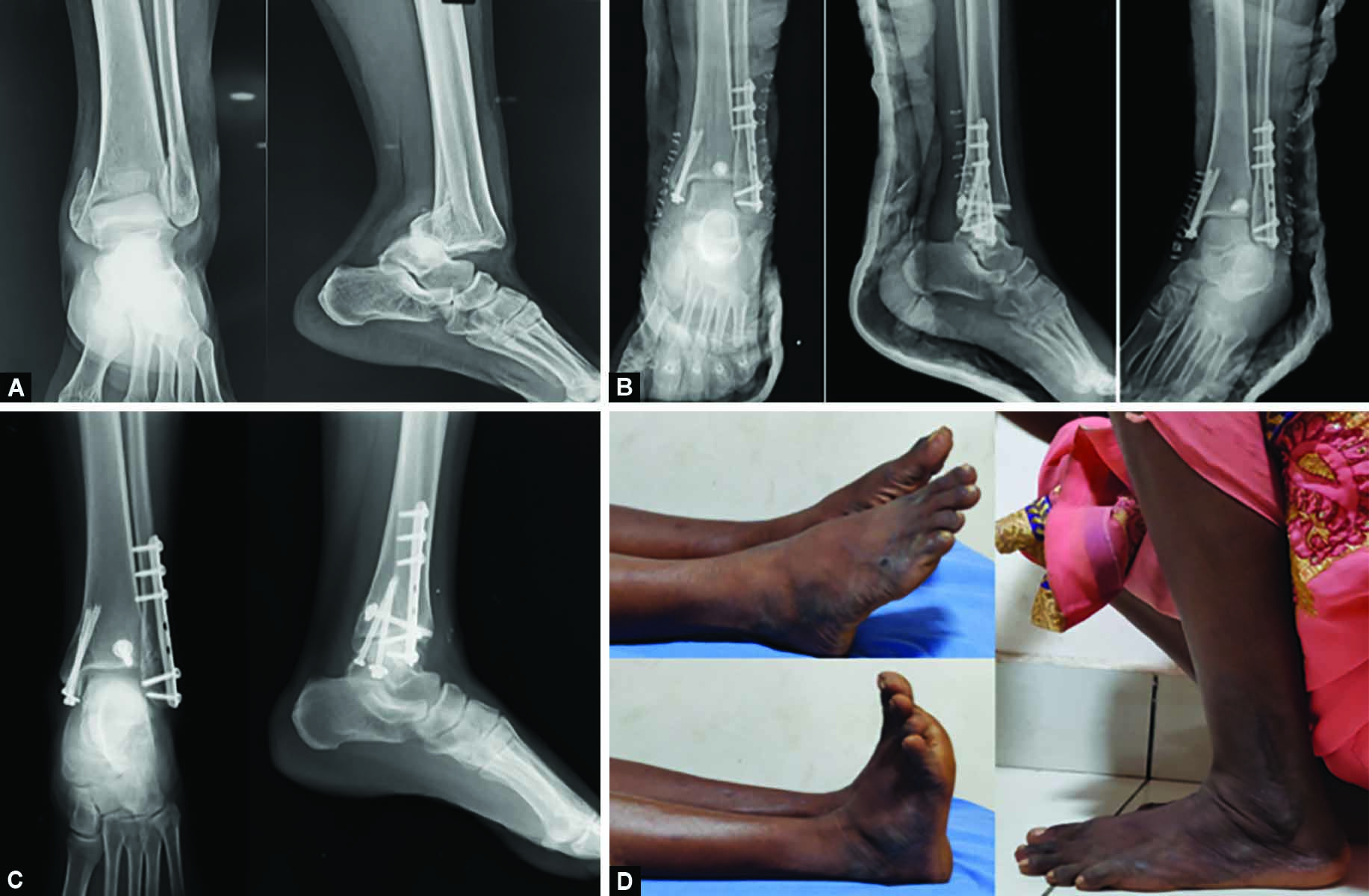 The average time duration between injury and surgery was 4.6 days. Surgery was performed within 48 hours of the trauma for ten cases (33.3%) and excellent to good outcomes were observed in five cases (16.6%). There was a surgical delay of 2–7 days in 50% of the patients and a total of 43% of patients, who were operated after 48 hours of injury, showed excellent to good outcomes. But there was no statistical significance noted between the functional outcome and delay in surgery from the time of injury with p-value of 0.3.

The mean Baird and Jackson ankle scoring system postoperatively was 28.93, 62.2, and 88.76 at 8th week, 3 months, and at end of 6 months, respectively. There was a statistically significant improvement in the scores from the 8th week to 6th-month post-op (p-value 0.001).

In our study subjects, other injuries were noted in two patients along with ankle fractures. One patient had soft tissue injury of the heel of the ipsilateral limb, while another one sustained periprosthetic femur stem fracture of the bipolar prosthesis of the contralateral limb. Both were associated with the poor outcome at 6 months follow-up.

The complications noted in our series were hardware irritation, superficial infection, and deep-seated surgical site infection.

In our study, the majority of ankle fractures were seen in the 5th decade and female patients similar to studies done by Juto et al.6 and Ebnezar and John7 which points out changing trend with more female predominance. The mode of injury in our study was predominantly low-velocity injury, also seen in a study done by Daly et al.8

The SER type had excellent outcomes compared to other types of injuries in this series. A total of 60% of cases showed excellent to good functional and radiological outcomes at the end of 6 months follow-up. The functional outcome score increased with an increase in the mean duration of follow-up as seen in studies done by Kakkar et al.9 and Xing et al.10 with a mean duration of follow-up of 13 months and 16 months, respectively.

We have limitations as observational studies have, was the small sample size, the shorter duration of follow-up, and patients with other associated injuries experienced a negative impact on the functional outcome.

Open reduction and internal fixation of the ankle by meticulous soft-tissue handling and biological fixation by following AO principles result in a favorable outcome. Earlier the fracture union better the functional outcome. Poor clinical results were noted more in the geriatric population, patients with weber type-B fracture, and in patients with non-compliance to physiotherapy and rehabilitation protocol. Prospective studies with a larger sample size and longer duration of follow-up will help to identify factors associated with functional outcomes.