A Novel Idea to Reduce the Consumption of Povidone-iodine in the Operation Theater: A Need of the Hour for Developing Countries

Introduction: Surgical site infection (SSI) is the most common hospital-related infection in developing countries. Antiseptics are used to prevent SSIs. Iodine, alcohol, and chlorhexidine are commonly used for preoperative skin preparation. Of these, povidone-iodine is most commonly used in the operation theater.

Aim and objective: Our study aims to compare the quantity of povidone-iodine used in operation theater by a conventional method with the measurable spraying device method.

Materials and methods: This prospective study was conducted in Government Coimbatore Medical College Hospital at Institute of Orthopedics and Traumatology, Coimbatore, Tamil Nadu from 2018 to 2019 in its four elective theaters and one 24 × 7 emergency operation theater. We sprayed povidone-iodine over the skin during the preoperative skin preparation and calculated the usage for every patient with measurement in the bottle and compared it with the conventional method of skin preparation with the gauze soaked in povidone-iodine solution in a sterile bowl.

Conclusion: By using a transparent spraying bottle with measurement on the container, the quantity of povidone-iodine utilization in the operating room can be drastically reduced, thereby reducing the cost spent for antiseptics in health care.

How to cite this article: Sengodan VC, Ramakrishnan K, Purushothaman S, et al. A Novel Idea to Reduce the Consumption of Povidone-iodine in the Operation Theater: A Need of the Hour for Developing Countries. J Orth Joint Surg 2022;4(1):26–28.

Antiseptics have a broad spectrum of antimicrobial activity than antibiotics and reduced potential for bacterial resistance.5Antiseptics are often used as alternatives to antibiotics to prevent and treat SSIs.5

Our study aims to compare the quantity of povidone-iodine used in operation theater by a conventional method with the measurable spraying device.

This prospective study was conducted in Government Coimbatore Medical College Hospital at the Institute of Orthopaedics and Traumatology, Coimbatore, Tamil Nadu from 2018 to 2019 after ethical committee clearance. It is a tertiary care hospital with four operation theaters for elective orthopedic surgeries and one operation theater for 24 × 7 emergency services. It is a high-volume center in south India. In most of the low-income countries, during surgery preoperative and skin preparation was done using sterile gauzes soaked in a povidone-iodine solution (Fig. 1). The remaining povidone-iodine left in the bowl becomes a medical waste. Spillage during painting and accidental spills in the trolley accounts for additional wastage. To reduce the cost and wastage of povidone- iodine for preoperative skin preparation, we used transparent containers with measurement markings and a spraying device. We sprayed povidone-iodine over the skin during the preoperative skin preparation. We calculated the usage for every patient with measurement in the bottle and compared it with the conventional method of skin preparation with the gauze soaked in povidone- iodine solution in a sterile bowl (Fig. 2). 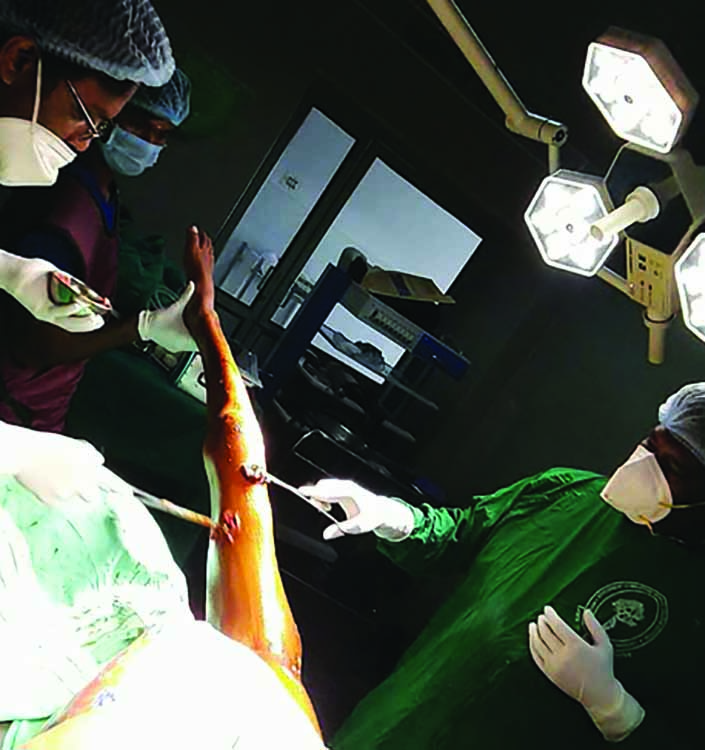 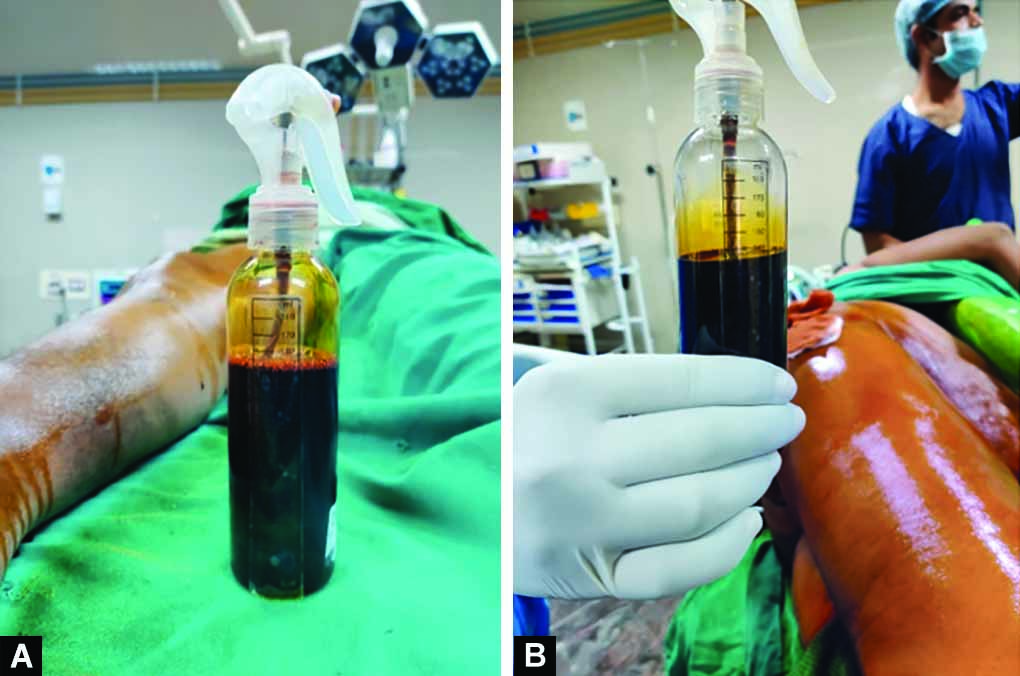 Figs 2 A and B: Spray bottles with measurements used in skin preparation

We aim to know the effectiveness of the use of a transparent container with measurement markings and a spray device for the usage of povidone-iodine as a cost-effective method. All orthopedic surgeries done in the year 2018 and 2019 were included in the study.

The chemical agent which reduces the microbial organisms over the skin is called antiseptic.4

An ideal antiseptic should have the following characteristic; it should be active against bacteria, viruses, fungi, protozoa, tubercle bacilli, and spores. It should not produce any allergy to the skin; should be safe for all body parts; should not be absorbed into the body; should have residual activity; should be used safely repeatedly.4

The skin contains so many microorganisms on its surface, each square centimeter of skin contains up to three million microorganisms.6Antiseptics have residual microbicidal activity on the skin because it binds to the stratum corneum.7Chemical killing and inhibition of contaminating and colonizing flora are the primary actions of antiseptics.8 Skin microorganisms are of two types: commensals and transients.8 Commensals are the organisms that normally reside on the skin, transients microorganisms are easily exchanged between individuals and are not consistently present on the skin.8 The transient organisms are easily removed from the skin, but, the commensals are difficult to remove from the skin completely.8 The commensals include Staphylococci, Pseudomonas , and diphtheria, if they are allowed to enter into the body and multiply, it causes harmful infections.7 When the number of bacteria in the incision site overcomes the host’s defenses lead to SSI.7Surgical site infection most commonly occurs due to the patient’s skin commensals.7

Halogen-releasing agents (iodine), alcohol, and biguanides (chlorhexidine) are the commonly available antiseptics for skin preparation before surgery. Alcohol and chlorhexidine are actively killing bacteria, viruses, and fungi but are not sporicidal.9

The iodine-based microbicidal compound is a halogen-releasing agent.9The iodine-based compound is commonly used for skin preparation before surgery. Iodine/iodophors are iodine solutions that rapidly act and are effective against a wide range of gram- positive and gram-negative bacteria, the tubercle bacillus, viruses, fungi, and sporicidal.4Iodophor comprises free iodine molecules bound to polyvinylpyrrolidine (povidone), so it is called povidone- iodine.4Iodophors penetrate the microbial cell wall, free iodine oxidizes the microbial contents.4Ten percent of povidone-iodine formulations contain 1% available iodine.4Povidone-iodine is soluble in both water and alcohol, and is available as aqueous iodophor scrub and paint, aqueous iodophor one-step preparation with polymer.4Even at low concentrations, povidone-iodine rapidly acts on nucleotides, and fatty acids lead to cell death.9In the enveloped viruses, it acts on the surface proteins, also reacts with unsaturated carbon bonds, and destabilizes membrane fatty acids.9

Many studies state the antiseptic properties and uses of povidone-iodine in the surgical field. To the best of our knowledge, there are no studies regarding the consumption and unnecessary wastage of povidone-iodine in the operation theater. In developing countries, health care is a huge financial burden. Povidone-iodine is used as an antiseptic in most healthcare institutions. By using a simple method, we have reduced 70% of the consumption of povidone-iodine in our tertiary care hospital. By applying this method, a large amount of healthcare cost can be saved and the quantity of medical waste can also be reduced. The spraying device is very well available in most places and the cost of the device is negligible compared to the cost saved by our novel method.

Povidone-iodine is commonly used in most healthcare institutions all over the world to prevent SSIs. By our simple method of utilizing the available resources, the quantity of povidone-iodine utilization in the operating room is drastically reduced. The government, instead of procuring the povidone-iodine in the PET bottle they can direct pharmaceutical companies to provide it in a transparent spraying bottle with measurement on the container to reduce the healthcare cost spent for povidone-iodine.