Introduction: The International Osteoporosis Foundation has estimated that worldwide, approximately 30-50% of people aged over 50 years are at risk for the development of fragility fractures secondary to osteoporosis. Vertebral compression fractures occur in 20% of people older than 70 years and in 16% of postmenopausal women. The majority of fractures heal with conservative treatment after 8-10 weeks. Surgery is indicated for patients who present with neurological deficits, deformities, and incapacitating pain with conservative treatment failure. Two percent of patients with osteoporotic vertebral fractures (OVFs) develop cord compression. This study aimed to identify the clinical presentation and predictors of clinical outcomes among patients operated for delayed neurological deficits after OVFs.

Conclusion: Although OVFs are common and generally considered benign, severe and delayed neurological deficits can occur following spinal cord compression. In experienced hands and with appropriate patient selection, posterior short segment fixation (PSF) and vertebroplasty is a safe and efficacious procedure for the treatment of osteoporotic compression fractures with neurological deficit.

This study aimed to identify the clinical presentation and predictors of clinical outcomes among patients operated for delayed neurological deficits after OVFs.

Patients older than 60 years with OVFs, presenting with severe back pain and delayed neurological deficit were followed in our institution from 2015 to 2019.

The following number of cases were taken for study:

All the cases underwent posterior short segment fixation (PSF) with pedicle screws one level above and one level below the fractured vertebrae. After inserting the pedicle screws and rods, indirect decompression done by gentle distraction and then vertebroplasty done by injection of PMMA cement into the vertebral body through Jamshidi needle placed in the vertebral body (Figs 1 and 2). 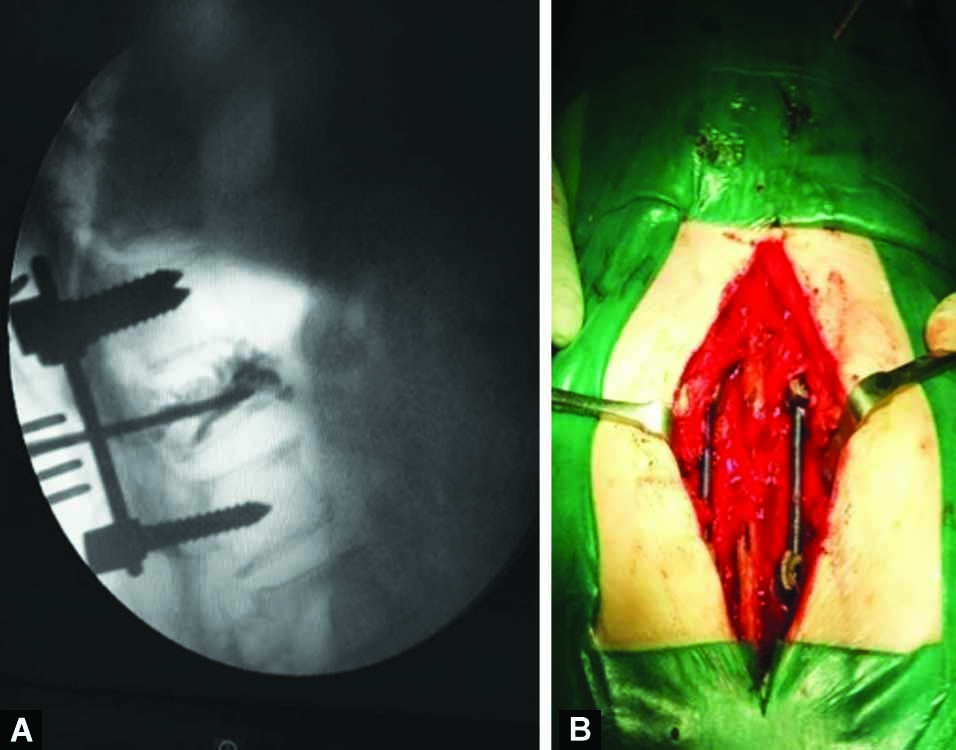 Figs 1A and B: Intraoperative posterior short-segment fixation and vertebroplasty 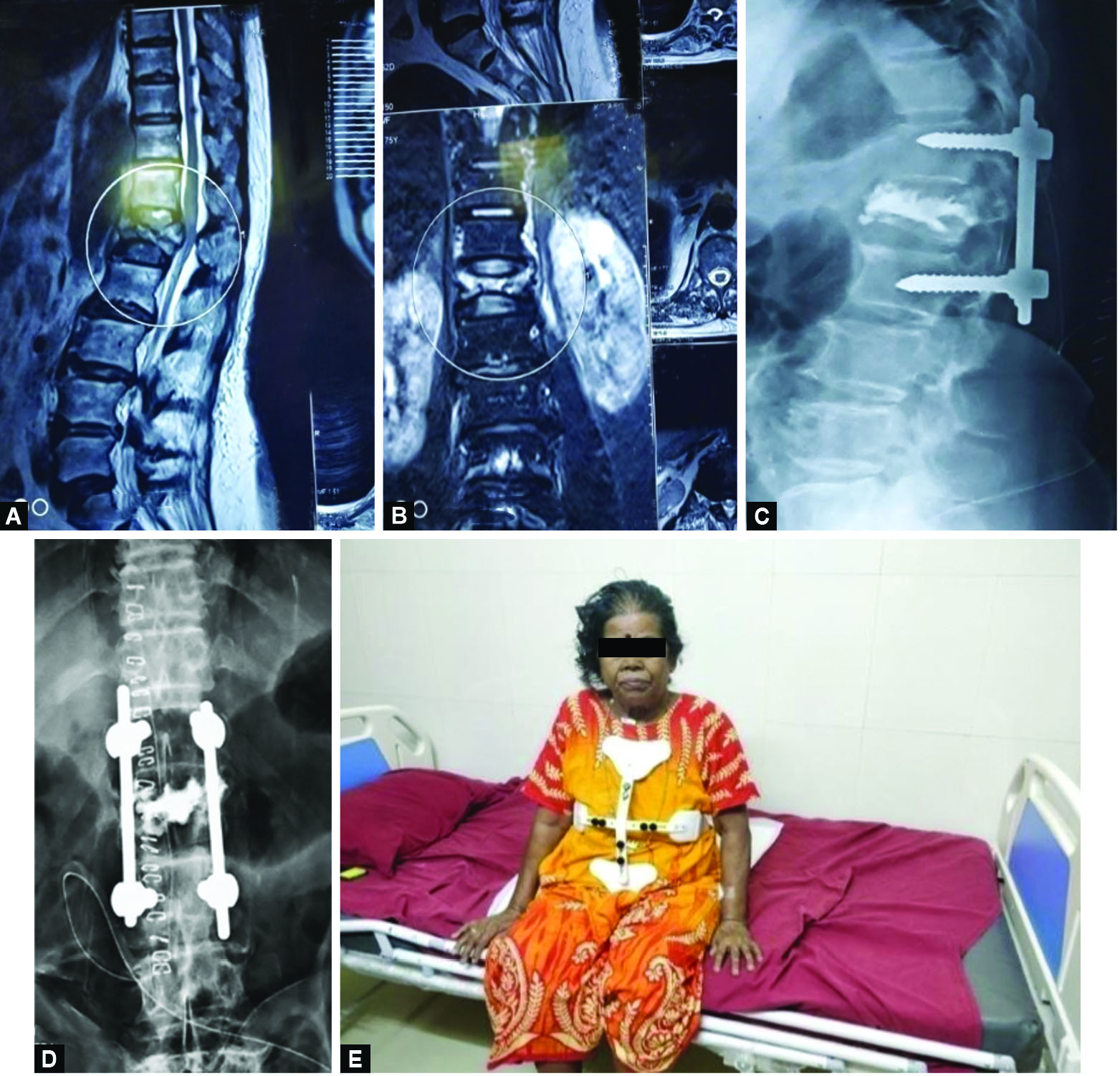 Figs 2A to E: (A and B) Preoperative; (C and D) postoperative- 66 years woman presenting 2 months postinjury with back pain and neurological deficit ASIA grade C. She underwent PSF, indirect decompression, and vertebroplasty and recovered to ASIA grade E; (E) Postoperative clinical picture after surgery

The following scores were used to assess the patient postoperatively.

All patients had significant improvement in the VAS pain score.

Postoperatively all patients had neurological improvement and it improved up to ASIA grade E in seven patients, and to ASIA grade D in one patient.

The majority of OVFs fractures heal with conservative treatment after 8-10 weeks. Very few patients presenting with persistent back pain not responding to conservative treatment may be treated with percutaneous vertebroplasty or kyphoplasty, which is very minimally invasive procedure and give dramatic pain relief.

The natural history of VCF is that 30% develop further collapse, 13% go for nonunion, and 3% develop neurological deficit as per Taenichi et al.6

VCF may present as neurological deficits (in 3% of patients) due to spinal cord compression in which vertebroplasty alone may not be useful and treating these fractures is a big challenge. A gradual or delayed onset of neurological deficits from 1 to 8 weeks and 1 week to 3 months after OVFs is common.

Surgery is indicated for patients who present with neurological deficits, deformities, and incapacitating pain with conservative treatment failure.

The concept of spinal instability has been recently introduced in the osteoporotic VCFs, as these fractures were traditionally considered stable and treated with conservative treatment. However, there are certain risk factors when present make these fractures unstable leading onto a progressive collapse, kyphotic deformity and neurological deficit (Fig. 3).

Figs 3A to C: Risk factors of progression

The following were considered as the risk factors for neurological deficit:7

The goal of treatment in these fractures are:

The surgical procedures available for treating these fractures with neurological deficit are:

Figs 4A to D: (A and B) Showing preoperative; (C and D) postoperative pictures of 65 years old male presenting with Asia grade B - 2 months post-injury

The advantage of anterior surgery is that decompression is much better and direct. The main disadvantage is the complications associated with Anterior Surgery (Thoracotomy and Laparotomy needed) is as high as 70%.17

Surgery in elderly individuals is associated with high complication rate as Nguyen et al. reported a complication rate of 70%, due to comorbid conditions, and severe osteoporosis, implant purchase very poor.18

All orthopaedic surgeons are familiar and morbidity is less. Pedicle screws are biomechanically stronger than screws used in vertebral body by anterior approach. At the same time vertebroplasty when done is a less invasive procedure for creating anterior column stability, which is very essential to prevent future collapse and maintain stability of the spine.19

Most authors feel that the neurological deficit following VCFs is mainly due to instability rather than mechanical compression and hence they had suggested to stabilise the spine and do an indirect decompression by gentle distraction and anterior column support by vertebroplasty.20

Ho et al. in Injury 2018 February 49,2 in a prospective study of 31 patient had concluded that surgery in the form of indirect reduction, kyphoplasty and post short segment fixation gives best results.

Masofumi et al. in Euro Spine Journal 201316 has concluded the direct decompression is not always necessary, and majority of the patients can be treated with a less invasive procedure like post short segment fixation,21 indirect decompression and vertebroplasty.

Our study is limited by its retrospective nature, relatively small group of patients, lack of a control group and continuous BMD monitoring.

In experienced hands and with appropriate patient selection, Posterior short segment fixation, indirect decompression and vertebroplasty is a safe and efficacious procedure for the treatment of osteoporotic compression fractures with neurological deficit.