Case description: We are presenting our patient with osteosarcoma in the right proximal humerus from the Southern Region of India. He had been managed well with reconstructive surgery using prosthesis and shoulder capsule reconstruction with the synthetic aortic graft. This 64-year-old, pleasant gentleman presented to us with acute onset of right shoulder pain and limitation of movements of the right shoulder joint limiting his routine activities. It had been successfully managed by a team of specialists with limb-salvage surgery.

Conclusion: We validate that this tumor can occur in the proximal humerus of our Indian-aged man and when he presents to us early, he can be treated well by limb salvage with reconstructive surgery.

Osteosarcoma is the most common malignant tumor of the bone.1 The humerus is a frequent location for malignant tumors, especially at its proximal end.2–4

Due to the highly developed investigative tools, recent advances in effective adjuvant chemotherapy, and good surgical methods like soft tissue reconstruction, arthroplasty with limb salvage surgery is now an accepted and successful management for bone tumors2,5 and also the most reliable procedure for the proximal humerus.6 The endoprosthesis surgery is technically less challenging, provides satisfactory and reproducible results.7,8

Endoprosthetic reconstruction is recommended for older patients with proximal humerus osteosarcoma having metastasis.7 Today, the serious complication of dislocation after shoulder implant tumor surgery has been addressed well with shoulder capsule reconstruction with various modalities including synthetic aortic graft.9

To date, there are fewer articles from our region on the functional and oncological outcomes of patients who have undergone humerus prosthetic reconstruction for malignant bone tumors. However, a reported series of patients with malignant tumors of humerus who had their tumor excised and reconstructed with custom-made prosthesis shown excellent 5-year survival rates.2,10

Comparing the other anatomic regions, the proximal humerus has encouraging functional results and implant longevity reports after endoprosthetic reconstruction.7

We are describing our experience of successfully resected osteosarcoma in the proximal humerus and limb-salvage surgery. It was well reconstructed with a custom-made prosthesis and synthetic aortic graft for the shoulder capsule.

This nice gentleman of 64 years presented to us with severe right shoulder pain for several weeks along with restriction of shoulder movements. He had been managed initially elsewhere. He is non-diabetic and normotensive.

The initial workup has been done by the orthopedic surgeon and his team with the support of a medical oncologist. The diagnosis of osteosarcoma was confirmed by the plain radiographs of the right shoulder, blood examination, magnetic resonance imaging, and fine-needle aspiration cytology by the pathologist (Fig. 1). After that, a tumor board was formulated at our hospital by a team of experts comprising medical oncologists, orthopedic surgeons, intensivists, pathologists, radiologists, anesthesiologists, and an emergency doctor. The board directed us to provide preoperative neoadjuvant chemotherapy and limb-salvage surgery. We have initiated chemotherapy as injection vincristine 2 mg, injection doxorubicin 80 mg, injection cyclophosphamide 1,000 mg, injection filgrastim 300 μg subcutaneously. But the patient skipped the initial follow-up, not taken the prescription, and presented to us in a very sick condition after several days. He had renal failure and pancytopenia. It was managed well by the expert team involved in the oncological care and nephrologists. During the course, the nephrologist has been included in the tumor board in saving this patient. 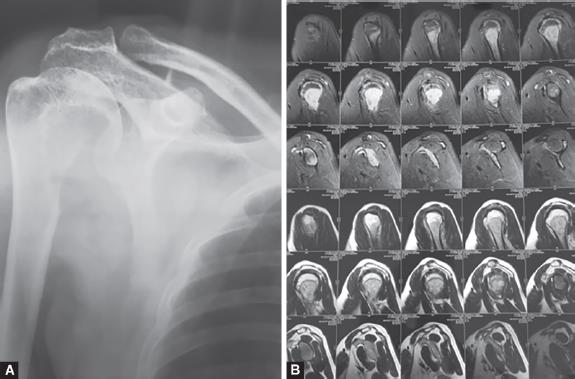 Figs 1A and B: The X-ray and MRI of right shoulder showing the osteosarcoma of the right proximal humerus

The tumor board met regularly and decided on the early surgery methodology, free margin decision (3 cm from the tumor site), and osteotomy site as per the principle of surgical resection of osteosarcoma.1 Also, the mode of anesthesia, postoperative protocol, and more on the patient care was discussed well. The radiographic and clinical measurements directed us to design the custom-made prosthesis (Fig. 2). For the capsule reconstruction, it had been decided to use the aortic synthetic graft and its fixation to the glenoid labrum using arthroscopic sutures.9 The tumor board advised having the oncological surgeon assist the orthopedic surgeon in the procedure. The board also directed the medical oncologist to be present during the procedure.

Considering the health condition of the patient, the senior anesthesiologist and intensivist gave the regional anesthesia as supraclavicular scalene block and took care of the pain management. The surgical team consisting of an orthopedic surgeon, specialist oncological surgeon, junior resident in orthopedic surgery in presence of a medical oncologist who performed the reconstructive surgery. The deltopectoral approach was used. The biopsy tract was excised by integrating an elliptically shaped incision. The humeral shaft was isolated and cut distally using an oscillating saw at a point 3 cm from the distal end of the tumor (Fig. 3). We did measure the resected specimen on the back table to approximate the required replacement length, then it was sent for pathologic analysis. Also, the cancellous bone was curetted from the medullary canal distal to the osteotomy and sent for biopsy.

A custom-made cemented shoulder prosthesis has been implanted as per arthroplasty principles. A synthetic mesh commonly used in vascular surgeries has been used to improve shoulder stability and facilitate soft tissue attachment after prosthesis reconstruction. By creating a sleeve, the graft was anchored to the glenoid and enfolded around the reconstructed proximal humerus. The shoulder capsule has been reconstructed with synthetic aortic graft by fixing it to the glenoid labrum with special anchor sutures used in arthroscopy and the muscles around had been sutured well to the graft (Fig. 4).

The excised specimen has been reported as small cell osteosarcoma after a detailed pathological study. The medullary curettage specimen was normal. For postoperative pain management as the patient was well cooperative opioids were not used except the immediate postoperative period. The NSAIDs including diclofenac sodium and paracetamol have been used for pain control. He had challenged postoperative recovery and wound healing was delayed.

Figs 3A and B: The intraoperative pictures of resection of the osteosarcoma of the right proximal humerus

Systematic physiotherapy and rehabilitation program have been set up as per international guidelines.11 We aimed at restorative which is to return to his independent level of function; however, we started with a supportive protocol which is regaining reasonable freedom in his daily activities with improved quality of life. The synthetic vascular graft improved postoperative stability and provided a biocompatible scaffold for soft tissue ingrowth. Our patient has good shoulder mobility, good elbow and hand function with a Musculoskeletal Tumor Society (MSTS) score of 90%.

The PET scan screening has been done which shown clearance of tumor. He recovered fully and he had completed a full cycle of chemotherapy consisting of injection docetaxel 120 mg, injection gemcitabine 1 g, injection filgrastim 100 μg subcutaneously. He had improved well and is on regular follow-up.

The osteosarcoma affecting the humerus bone is an unusual cause of acute shoulder pain. Our patient presented with severe pain and restriction of movements in his right shoulder. In the time before chemotherapy–the tumors arising from the proximal humerus have been treated with surgical ablation. However, with the advent of radiotherapy and chemotherapy–limb salvage surgeries have become the regular management. The definitive purpose of surgical treatment is complete removal of the tumor, preservation of the limb with satisfactory shoulder, elbow, and hand functions.4

Reconstruction of large segmental defects following resection is a demanding exercise. This procedure with endoprosthesis is a common mode of surgery today as it gives a predictable functional result, allows early rehabilitation and has intraoperative flexibility in the length of reconstruction required, and is unaffected by adjuvant chemotherapy. Also, preoperative, postoperative counseling and closed monitoring will yield much higher results in this procedure.

Limb salvage has been successfully replaced amputation as the standard of care for the management of primary and secondary malignant tumors of long bones including the humerus, mainly due to the recent advances in chemotherapy. There are many advantages in this procedure including emotional acceptance, the good functional ability of the elbow and hand.10 Also, the prosthetic replacement of the proximal humerus gives a safe, possible, and dependable option. It does provide quick recovery. But the active shoulder movements are compromised in many patients. The shoulder stability will also be challenged and a lot of attempts have been made with different procedures by several surgeons. The stainless steel wires, mesh, and dacron tapes are being used to safely fix the prosthetic humeral head to the acromion.2 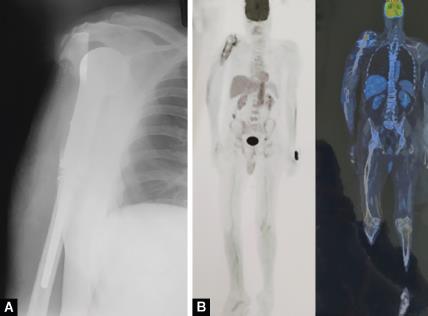 Figs 5A and B: The postoperative X-ray picture and PET scan screening

A common deficiency of this procedure of tumor shoulder prosthesis replacement is a failure in achieving functional and dynamic action, mainly due to weakness of the intrinsic stabilizers of the shoulder including the rotator cuff tendons. Although many surgeries have been attempted for stabilizing the shoulder, their results are not much satisfactory.

Recent developments in orthopedic oncological surgery had allowed limb salvage for the treatment of tumors of the appendicular skeleton. However, the preservation of the affected limb with metallic prosthesis or allografts after tumor resection is often associated with substantial soft tissue loss and functional deficits, especially in the shoulder leading to instability and increased risk for joint dislocation. The evidences suggest the use of a synthetic vascular mesh while reconstructing proximal humerus will improve the stability and reduce dislocations. It also helps in soft tissue attachment and reconstruction after tumor resection.9,12,13

It is a well-known factor that, oncological surgery requires a synchronized multispeciality treatment plan applied in a focused unit ensuring that all oncological treatment needs are fulfilled as per the advances.14 The same can be organized in tier two cities with a committed team and good results can be achieved (Fig. 5).

When a non-diabetic Indian elderly man experiences excruciating pain suddenly in his shoulder compromising routine activities, he should be investigated for the malignancy as well. The plain radiographs, needle biopsy, and magnetic resonance imaging confirmed the diagnosis. The limb salvage reconstructive surgery using a custom-made prosthesis and aortic synthetic graft for shoulder capsules is advisable.

This article does not contain any experimental studies with human participants or animals performed by any of the authors.