The Surprising Tale of Dark Replacement

Alkaptonuria is caused by the defective metabolism of homogentisic acid, which causes arthritis and connective tissue pigmentation. The knee is a commonly affected joint. Total knee arthroplasty (TKA) has been suggested as an effective treatment for end-stage ochronosis arthropathy. A case of a 62-year-old man presented with pain in both knee joints and X-rays revealed advanced degenerative arthritis. During knee replacement, the subcutaneous tissues revealed blackish nodules. It was difficult to retract the patella as the patella tendon was stiff and hard with blackish discoloration. On dislocating patella, the patella tendon was avulsed on the right knee; later, it was fixed with a suture anchor and stapler. To avoid patella tendon avulsion, we did a tibial tuberosity flip osteotomy on the left knee. Ochronosis arthropathy should be considered as a diagnosis when faced with black connective tissue intraoperatively. Surgeons should anticipate patella tendon avulsion and difficulties in soft tissue balancing in the onchronitic knee and ready to tackle the complications.

Ochronosis arthropathy is one of the manifestations in patients with alkaptonuria. Alkaptonuria is a rare autosomal recessive disorder with an estimated prevalence ranging from 1:19,000 to 1:250,000. The disorder leads to a defective enzyme homogentisate 1,2-dioxygenase (HGD), resulting in the accumulation of homogentisic acid. They may deposit in collagen-rich connective tissues to form yellowish discoloration hence termed ochronosis (ochre: yellow in Greek). These changes make the connective tissue more brittle and chemically irritate the joint, causing degeneration of the joint with eventual end-stage arthritis, with the knee being most commonly affected.1

Total knee arthroplasty (TKA) has been suggested as an effective treatment for end-stage ochronosis arthropathy.2 Although the condition is rare, the aging society and increasing volume of TKA will mean surgeons may eventually encounter this.

A 62-year-old man presented to our institute with a history of pain in both knee joints for 4 years. He was known for the case of diabetes, hypertension, and coronary artery disease on regular treatment. He had undergone PTCA for single vessel diseases 1 year back. For knee pain, he was initially treated by analgesics and physiotherapy which relieved his symptoms temporarily, without sustained improvement.

Examination showed mild swelling, with tenderness over knee joint line with varus deformity of both knees of around 15° each and flexion contracture of 20° on the right knee and 15° on the left knee. There was no laxity of the collateral or cruciate ligaments. The range of motion in the right knee was 20–90° and in the left knee was 15–100°. Preoperative knee society scores were 41 and 47 for the right and left knees, respectively, and the functional score was 45 for both knees.

Radiographic evaluation of both knee joints revealed advanced degenerative arthritis, with significant loss of joint space, subchondral sclerosis, and excessive osteophytes with patellofemoral degenerative changes (Fig. 1). As the patient had difficulty in standing, we were not taken a scanogram. Other laboratory analyses were normal. Echocardiography report showed thickened mitral and aortic valve, normal LV function with 55% EF.

After medical and anesthetic fitness, the patient was planned for cemented total knee replacement for both knees at the same time. Until the surgery was done, we did not know that he was alkaptonuric. During surgery right medial parapatellar approach, midline skin incision was made. The subcutaneous tissues revealed blackish nodules. It was difficult to retract the patella as the patella tendon was stiff and hard with blackish discoloration. On dislocating patella, the patella tendon was avulsed on the right knee (Fig. 2); later, it was fixed with a suture anchor and ligament stapler.

The ligaments, joint capsule, and synovium were having brownish-black discoloration. The deposition of black pigment was seen throughout the articular cartilage. The menisci were degenerated, brittle, with large areas of black pigmentation. The collateral and cruciate ligaments were intact but with reduced bulk.

Intraoperatively, we had difficulty in dislocating the patella despite quadriceps tendon incision, which results in patella tendon avulsion on the right knee. After taking bone cuts (Fig. 3) and resurfacing the patella, cemented posterior stabilized implant was placed (Fig. 4). As we had difficulty in soft tissue balancing and more preoperative blood loss which obscuring the surgical field, surgical duration was prolonged. Then, we planned to defer the procedure on the left knee.

Figs 1A and B: X-ray radiograph showed severe tricompartmental osteoarthritis with no joint space 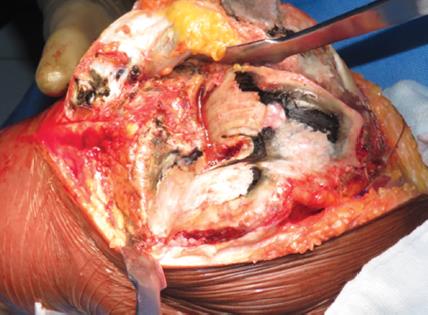 Postoperatively, on suspecting it to be alkaptonuria, when we took specific history for ochronosis, the patient did not give the history of blackish discoloration of urine but we noticed on standing urine color was changed black cola-colored after 24 hours. Blackish pigmentation was seen in the sclera of the eyes (Fig. 5), the base of pinna and axilla, which was only appreciated, after thorough proper examination and high index for suspicion for alkaptonuria after the right knee was replaced. Spine and pelvis radiographs (Fig. 6) were taken retrospectively. The spine radiograph showed a reduction of disk space, vacuum phenomenon, calcification of more than three intervertebral disks (Sandwich spine), a bony fusion of lumbar segment, diffuse osteoporotic spine. The pelvis radiograph showed bony ankylosis of both SI joints with enthesitis of ischial tuberosity.

Thus, finally, the diagnosis of alkaptonuria was made retrospectively. As the patient recovered well after the right knee replacement, the left knee was also replaced similarly 5 days later, with the advantage of knowing the intraoperative finding earlier. To avoid patella tendon avulsion, we did tibial tuberosity flip osteotomy on the left knee (Fig. 7). A similar finding was seen in the left knee as well. Postoperative radiographs were taken (Fig. 8) and he was mobilized.

Ethical clearance was obtained from the committee for this study.

The only manifestation seen at birth and early childhood is dark color urine, due to the large quantity of HGA in urine, a pathognomonic sign for alkaptonuria. Other clinical manifestations of alkaptonuria are observed only after the fourth decade because with aging the renal clearance of HGA decreases, leading to its deposition in tissues. Deposition may affect the entire body, but mainly in the skin, bones, joints, lungs, endocardium and valves, and kidneys causing cardiovascular, genitourinary, ocular, cutaneous, and musculoskeletal complications. Features include disk narrowing, calcifications and herniation, porotic vertebral bodies, and osteophyte formation, aortic and cardiac valve calcification and stenosis, coronary artery calcifications.3

Progressive arthropathy of the large weight-bearing joints particularly the knee, followed by the hip and shoulder, is the most common clinical feature of ochronosis, appearing after the fourth decade. The polymerized, deposited HGA discolors and weakens the connective tissue and cartilage, which is easily disrupted, fragmented, created loose shards, and finally lead to chronic inflammation, joint space narrowing, sclerosis, and eventually osteoarthritis, which stimulates other osteoarthritic patterns with a small inflammatory component due to synovial irritation. There are reports of ruptures of patellar and Achilles tendons, due to heavy pigmentation binding with high collagen content, leading to inflammation, calcification, and ruptures.4 So, we should ready to tackle that kind of complication like our case.

The spectrum of clinical variability may delay the diagnosis. Diagnostic confirmation of alkaptonuria is made by alkalinization of urine. Confirmatory tests for the diagnosis are chromatographic, enzymatic, or spectrophotometric or quantitative determination of HGA in urine.

Figs 3A and B: Intraoperative femur and tibial bony preparation with bone cuts showed blackish discoloration

Figs 5A and B: Urine turned into black cola colored after 24 hours urine collection. Black colored pigmentation over sclera

Ochronotic arthropathy may be diagnosed intraoperatively, on finding a blackened joint, as in our case, the diagnosis of ochronosis was not made until the exploration of the joint. Long-term use of levodopa, methyldopa, antimalarials, or products containing hydroquinone, phenol, resorcinol, mercury, or picric acid may give rise to pseudo-ochronosis.5

Currently, there is no specific or effective treatment for ochronosis. General accepted approach is symptomatic treatment, which includes treatment of pain, physiotherapy, and adequate anti-osteoporotic therapy, dietary protein restriction of phenylalanine, and tyrosine which had to be continued lifelong to prevent further disability. High-dose vitamin C decreases urinary benzoquinone acetic acid but has no effect on HGA excretion, and clinical studies have not shown its effectiveness. Nitisinone, a potent inhibitor of 4-hydroxyphenylpyruvate dioxygenase, which catalyzes the formation of HGA from hydroxylphenylpyruvic acid, reduces production and urinary excretion of HGA, but the role of nitisinone in treating ochronosis remains unknown.

Figs 6A and B: (A) X-ray lumbar spine showed disk space reduction with calcification of more than three intervertebral disk (sandwich spine), bony fusion of lumbar segment and diffuse osteoporotic spine. (B) The pelvis X-ray showed bony ankylosis of both SI joint with enthesitis of ischial tuberosity 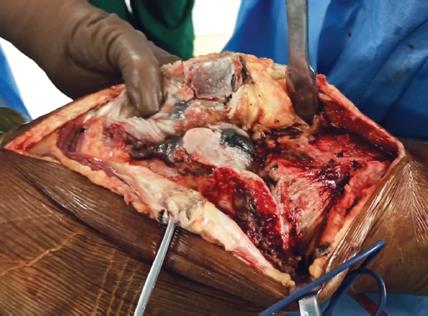 Figs 8A and B: Postoperative radiographs showed cemented implant position with suture anchor, ligament stapler on right knee and screws for tibial tuberosity on left knee 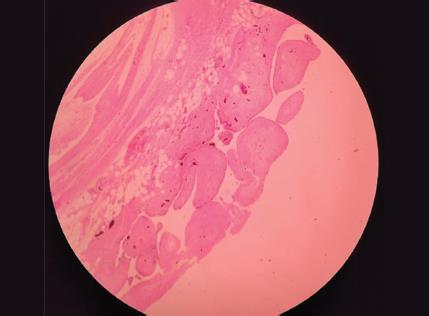 Total joint replacement of the hips, knees, elbows, and shoulders for significant degenerative arthritis for the alleviation of pain and increases in activity is well accepted. However, there are very few reports published on outcome comparison, cemented vs uncemented or unilateral or bilateral replacement, and these reports lack uniformity. Reports on total joint replacement have shown equally good results, comparable to osteoarthritic patients without ochronosis.6

Though most of these authors reported no difficulty during the TKR, Spencer et al. reported one case in which the patellar tendon was stiff and attenuated, making patellar dislocation difficult.7 In our case, the distal part of the right patellar tendon was heavily pigmented and attenuated, and ruptured without any excessive retraction force or intraoperative accidental injuries. To avoid patella tendon avulsion, we did a tibial tuberosity flip osteotomy on the left knee. Although there have been no previous reports of rupture of patellar tendon during TKR, Manoj Kumar and Rajasekaran8 reported a case of spontaneous rupture of the patellar tendon at the proximal part and three spontaneous ruptures of the Achilles tendon in two patients. According to the literature and our case report, there is no significant infection rate in ochronosis arthroplasty.

Ochronosis arthropathy should be considered as a diagnosis when faced with black connective tissue intraoperatively. Surgeons should anticipate patella tendon avulsion and difficulties in soft tissue balancing in the onchronitic knee and ready to tackle the complications. As there is an inflammatory component in ochronosis arthropathy, we suggest using cemented PS TKA with resurfacing of the patella.