The brachial plexus is a network of nerves formed by the ventral rami from C5–8 and T1. The radial nerve is the continuation of the posterior cord in the axilla with a root value of C5, 6, 7, 8, and T1. Anomalies may occur with the “formation” or “branching” of the plexus.1,2 Anomaly in the “formation” starts from the level of formation (pre or post fixed3) and extends to trunks, divisions, and cords. An anomaly in the “branching” pattern of the cords is the more common than the “formation” anomaly. Arrangement of the terminal branches shows very little variation.1 In this report, a rare variation in the branching pattern of radial nerve (terminal branch) is reported.

A 65-year-old man presented with a “right” middle third humerus shaft fracture with intact radial nerve function. He underwent plate fixation for this fracture via anterior approach. Surgery was carried out under general anesthesia. Anterior midline incision was made over right arm. Biceps was reflected and brachialis was split. While exposing the proximal and distal ends of the fracture, radial nerve was seen close to the distal fragment but separated by a few muscle fibers from triceps (Fig. 1). The dissection was carried out to identify the butterfly fragment. Once this fragment was dissected out and brought into view, the radial nerve had come into the view. The radial nerve was seen as “two” divisions (Fig. 2). Further dissection was carried out proximally and distally to trace the divisions of the radial nerve within the limits of the skin incision that was planned for plating of humerus. The anterior division of the radial nerve was continuing as the regular radial nerve as it was crossing the lateral intermuscular septum and continued distally. The posterior division was seen giving branches to triceps muscle at regular intervals and was seen entering the triceps muscle distally. Nerve stimulator with sterile needle (Braun—used by an anesthesiologist) was used to stimulate the divisions of the radial nerve and to identify the muscle twitching. A current of 0.2 mA at 0.1 ms stimulation was used to elicit muscle response. Eliciting muscle response over anterior division resulted in contraction of extensor muscles of forearm and that of posterior division resulted in the contraction of triceps muscle only. Surgical fixation was carried out without causing any iatrogenic damage to the radial nerve (Fig. 3). 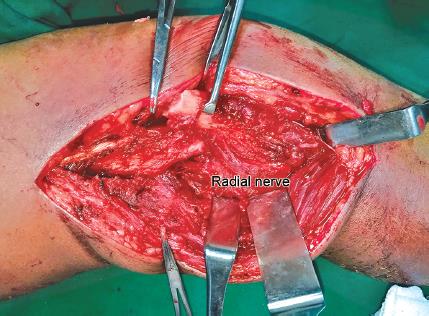 Fig. 1: Radial nerve seen during the course of dissection and identification of fractured bone fragments 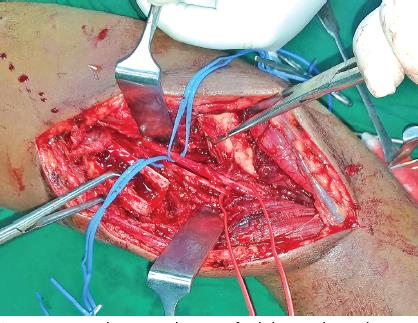 Fig. 2: Anterior and posterior divisions of radial nerve during dissection for butterfly fragment 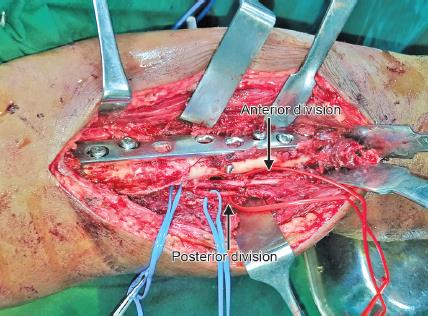 Fig. 3: Anterior and posterior divisions of radial nerve at the end of fracture fixation

Among the “formation” of cords, variations have been noted often in the medial and lateral cords but less often in the posterior cord.1 Aktan et al.4 reported that posterior cord and radial nerve arose only from the union of posterior divisions of the inferior and middle trunks. Oluyemi5 reported that brachial plexus was noted with two cords (medial and lateral) and three abnormal communications. A branch from the posterior aspect of the medial cord divided into the radial and axillary nerves.