Background: Facet tropism (FT) is the presence of asymmetry in the sagittal angulations of the bilateral facet joints, which is proposed to be a contributing factor for certain spinal disorders. Few studies are present in literature discussing the prevalence of FT in the lumbar spine among the South Indian population and our study shall focus on this by identifying it on MR imaging.

Materials and methods: It is a cross-sectional study, where 400 lumbar MRI scans of patients with low back pain without trauma, deformities, and surgical history were studied between 2016 and 2019. Facet angles are measured and the presence of FT and its severity is assessed on axial sections in all the patients. Data is subjected to statistical analysis.

Conclusion: The presence of FT is not uncommon, although its incidence varies at each level of the lumbar spine. The prevalence of FT in our study population is 44.6%. The highest prevalence of FT and a severe degree of FT were noticed in the L4-L5 level.

The facet or zygapophyseal joints are a pair of plain, synovial joints formed between the inferior and superior articular processes of the adjacent vertebrae. Each spinal motion segment shall comprise two facet joints. The major biomechanical functions of these joints are to facilitate, as well as limit the movement of that respective motion segment, thereby maintaining the physiological range of motion. This ultimately reflects the highly appreciated role of facet joints in securing spinal stability. In the lumbar spine, these joints are prompt stabilizers in preventing excessive flexion, rotation, and translation.1,2 Thirty-three percent of the dynamic and 35% of the static loads are sustained by facet joints approximately.1,2 The facet joints in the lumbar region have sagittal orientation and the articulating facets are at 45° and right angles to the frontal plane and transverse plane.3 This oblique orientation in the lumbar spine is of prime importance and disturbance in this results in spinal instability4 and degeneration.5 Asymmetry in the sagittal angles of the right and left facet joints at their corresponding intervertebral levels is called facet tropism (FT).6,7 Facet tropism results in torsional movements during dynamic changes of the lumbar spine and triggers pathological changes and spinal instability in the intervertebral disk accordingly.6,8 The concept of FT is not a new one in the research field related to the spine but identification of its prevalence is ignored usually and not many research articles have been published on it. Especially, articles discussing the prevalence of FT in South Indian population based on MR imaging are few, though the results based on computerized tomographic imaging are reported.9 This research was undertaken to identify the prevalence of FT in the lumbar spine, by MR imaging among the South Indian population.

We conducted a cross-sectional study on 400 adults attending the Orthopedic Out Patient Department of a tertiary care centre in Chennai between 2016 and 2019. One hundred and eighty-two (45.5%) females and 218 (54.5%) males are included in this study (Fig. 1). The age range was 26–86 years (Fig. 2) and the mean ages of the female and male samples are 52.89 ± 14.06 and 52.31 ± 13.62 years, respectively (Fig. 3). The age distribution among the samples (Fig. 4) and gender distribution across different age groups were evaluated (Fig. 5). The MR images of their lumbar spines were studied using the picture archiving communication system (PACS) database. Patients with low back pain with no significant restriction of daily activity were included and criteria for exclusion were patients with a history of spinal surgeries, spinal infections, spinal fractures, congenital and acquired spinal deformities, tumors of primary spinal origin, or metastasis. The degree of FT is identified based on Grogan et al.’s classification.10 When the difference between the facet angles of both the sides at a particular intervertebral level is >7°, they were considered of having FT.6 Difference of 7–15° (one SD from the mean difference) and then 15° (two SDs from the mean) between the orientation of the joints is considered as moderate and severe tropism, respectively.10,11 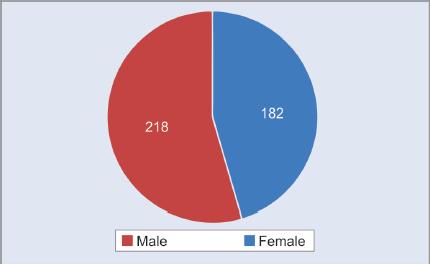 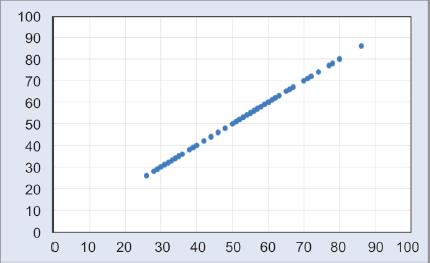 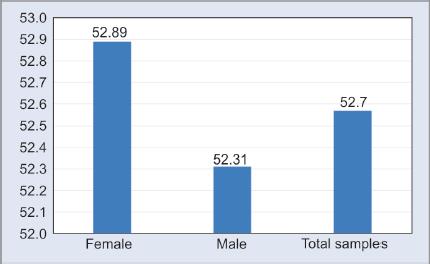 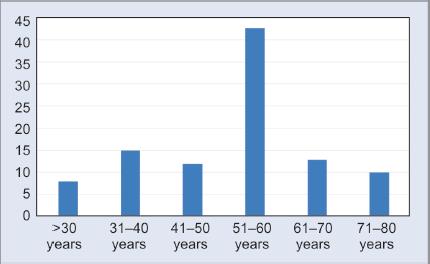 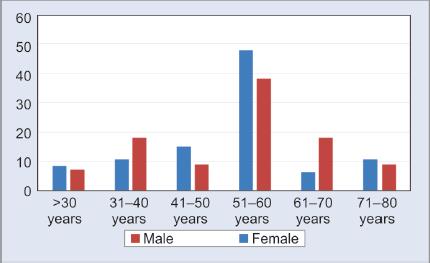 In recent years, MRI is the most common modality to assess patients with spinal degenerative diseases. In this study, 1.5-Tesla conventional MRI was used for scans of L1-S1 levels with 3 mm slice thickness and 5 mm slice gap on axial transverse and sagittal planes. To perform scans on patients, they were placed in a supine position. An intravenous anesthetic is used for one patient who could not tolerate the position due to pain they were experiencing. Patients with improper MR images due to rotation and artifacts were excluded. Focusing on obtained axial images, the clearest images with the best subjective view of both facet joints without rotation, or technical artifacts were selected. Facet angles were measured by drawing straight lines, one passing through a central point of the vertebral body and tip of the spinal process and the other line parallel to the midline of facet joints as described by Noren et al.12 (Figs 6 and 7).

The collected data were analyzed with IBM.SPSS statistics software 23.0 Version. To describe the data descriptive statistics frequency analysis, percentage analysis was used for categorical variables, and the mean and S.D. were used for continuous variables. To find the significance in categorical data, the Chi-square test was used similarly if the expected cell frequency is <5 in 2 × 2 tables then the Fisher’s exact were used. In both the above statistical tools, the probability value 0.05 is considered a significant level (p < 0.05). 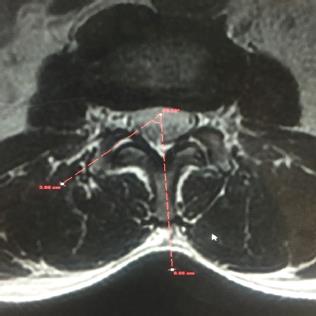 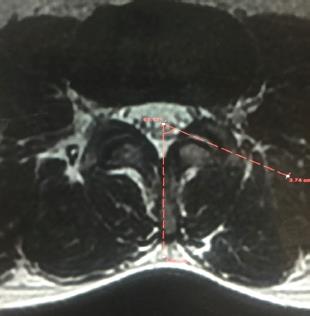 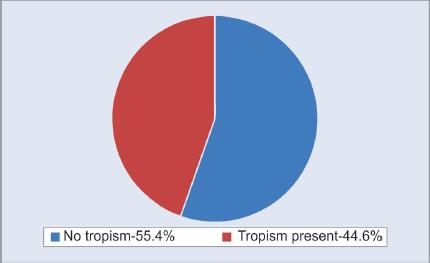 Fig. 8: Prevalence of facet tropism in the study population 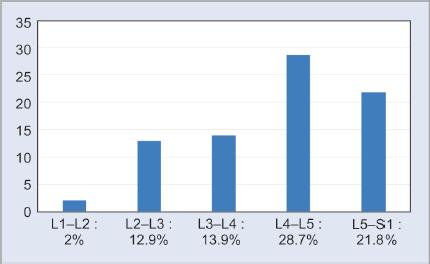 Fig. 9: Prevalence of facet tropism at each intervertebral level 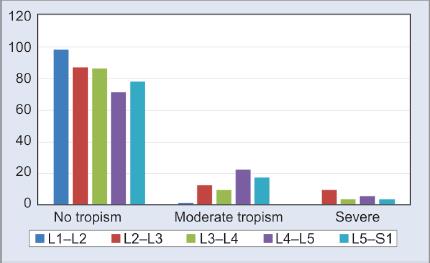 Fig. 10: Prevalence of degree of facet tropism at each intervertebral level

The facet joints are important elements of the posterior spinal column. The morphological characteristics of the facet joints reflect their biomechanical requirements.9 The anatomical orientation of these joints is not the same throughout the spine and shows clear regional differentiation. The facet joints are in the horizontal plane in the cervical spine facilitating greater mobility and more vertical in the thoracic region giving more importance to more stability than mobility. The plane of the facet joints varies with the level in the lumbar spine relating to the spinal movements at different levels13 and also a gradual increase in the facet joint angle.9 Facet tropism is an important concept to be focused upon contributing to the alteration of the normal biomechanics of the spinal column. Asymmetry in facet joint angles may result in instability which leads to pathologies like disk prolapse, disk degeneration, degenerative spondylolysis, and spondylolisthesis.6,7,13,14 Tropism has a crucial role in the decision-making of treatment, prognostication of disease, and predictive modeling.15 Tropism in the facet joints is mostly decided by the existing spinal phenotype which is developmental among the major population, but their combination with secondary changes cannot be neglected.15

This study revealed that FT is seen in 44.6% of the sample and a higher prevalence of FT is noticed at the L4-L5 level followed by L5-S1. A similar morphological study was done by Mohanty et al. also identified the prevalence of tropism is more at the L4-L5 level followed by L5-S1.9 Noren et al. also had similar findings in 1991 during his research about the correlation between FT and disk degeneration.12 Ko et al. a Korean population-based study also identified the presence of FT among 46.3% of the community-based population and the highest prevalence at the L4-L5 level.8 Arzpeyma et al. observed the highest rate of FT at L5-S1 when conducted a study in Iran.16 These observational conflicts in different studies may support the racial influence on the facet angle and FT in different populations. Future studies comparing the presence of FT and facet angles among different races may focus on the above concept.

The FT’s prevalence is evaluated based on gender, and the results indicated that the rate of prevalence is more in women than in men only at the L5-S1 level with statistical significance. Whereas such a significant difference is not observed at other lumbar levels. Sima Fallah Arzpyema et al. when compared the frequency of FT based on gender, they observed that FT is higher in men than women with no statistical significance at any intervertebral level.16 No gender-based difference in facet orientation and presence of tropism was noticed at any intervertebral lumbar level in studies done by Kalichman et al.13 and Love et al.17 Hence, we may not attribute gender to be a factor to determine the presence of FT.

The highest incidence of FT is noticed at the L4-L5 level seconded by L5-S1 level, i.e., more in the distal lumbar spine crediting to the increased demand of weight-bearing and increased range of movements. This has also been demonstrated by White and Panjabi relating the spinal movements and facet angles at different levels.18

Various studies are reported, discussing the role of FT in different spinal pathologies resulted due to instability, degeneration. Our study results may act as the baseline data for such studies. Reported studies have utilized CT imaging for evaluating the facet angles but MR imaging being an advanced and commonly used investigation used among the fraternity of spine surgeons, this method helps to correlate the facet angle on other spinal parameters and soft tissues at the same time avoiding dual investigations. We got satisfactory consistency, measuring the facet angle on MRI. Our concern about radiation damage to the 400 volunteers was another reason why our choice was not CT but MRI. We have a similar agreement from Xu et al.19 whose study concluded that MRI can reliably estimate the presence of FT and calculate the facet angle.19

Our study has certain limitations. First, it is a cross-sectional observational study on facet angle. Second, our study was limited by geometrical considerations and three-dimensional anatomy was not considered. Due to these limitations, further study is needed in the future.