Case description: Nowadays, management of end-stage rheumatoid wrist remains controversial between fusion and arthroplasty. We present a simple method of rheumatoid wrist fusion in a 56-year-old woman, using parallel Kirschner (K) wires and local ulna graft. Wrist fusion was achieved at 8 weeks, while implants are removed a month later without any complications in the immediate or late postoperative period.

Conclusion: Management of end-stage rheumatoid wrist with parallel wires remains a simple, versatile, and reliable method to achieve wrist fusion without any complication due to hardware or the disease by itself.

Total arthrodesis of the wrist is a reliable and gold standard method of management of end-stage arthritis in rheumatoid wrist resulting in a pain-free and functional hand. Various techniques of total arthrodesis of the wrist have been described, among which the most commonly used is a combination of bone grafting and internal fixation. Some authors have advocated arthrodesis without a bone graft,1–3 whereas others recommended the bone graft.4–7 Various fixation devices have also been reported, including K wires or Steinmann pins,4,7–10 staples,1 screws,11 and compression plates.7,12 However, the rate of successful fusion and the incidence of complications have varied greatly.

Consent was obtained for the publication of the case details without revealing the identity of the patient.

A 56-year-old right-hand-dominant woman presented to us with deformity in the left wrist since 18 months following native treatment to a fall at home. She is a known case of rheumatoid arthritis on regular medication with disease modifying anti rheumatic drugs (DMARDS) for the past 3 years. No other medical comorbidities were noted. Initial evaluation with radiographs was performed as shown in Figure 1, showing loss of wrist joint space with degenerative changes and subluxation with collapse of the proximal row of carpal bones to the impaction of the radius and ulna. Carpal height ratio has reduced significantly. We further evaluated the case with magnetic resonance imaging (MRI) as shown in Figure 1 to know the bony changes in the carpal bone to the impaction and to know the extent of degeneration in the articular cartilage. We planned for radiocarpal fusion with a parallel K-wire technique with available graft from the distal ulna resection.

The procedure was done under regional anesthesia under tourniquet control with the patient in a supine position. A dorsal skin incision was placed to divide the extensor retinaculum between the third and fourth compartments. Common extensor tendons were retracted ulnarward, and extensor pollicis longus tendon was retracted radially to expose the dorsal aspects of the distal radius, carpal bones, and metacarpal bases. Dorsal capsuloligamentous structures were erased by sharp dissection, and distal 2.5 cm of the ulna is resected. Articular surfaces were denuded of cartilage. Two 2.0-mm K wires were inserted through the second and third web spaces and brought percutaneously as shown in Figure 2. Ulna autograft was placed in a position between the radiocarpal raw bone ends and stabilized with K wires being driven backward with a mallet into the medullary canal of the radius. Morcellized graft was placed between the proximal carpal bones. K wires were advanced proximally just short of radial neck and recessed into the shaft of the metacarpal bones with a nail punch as shown in Figure 3. An oblique was introduced from the radial end to hold the fifth metacarpal base to increase the stability of the construct.

Since there is no definite consensus on the ideal position of the nondominant wrist in rheumatoid arthritis, we placed it in the intended alignment of 10° of dorsiflexion by bending the wire at the wrist level after being introduced into the bone. The capsuloligamentous structures were sutured and extensor retinaculum repaired. A below elbow cast was applied for 4 weeks. The oblique wire was removed at 6-week postoperative period as shown in Figure 4. Union was achieved at 8 weeks, and parallel wires were removed at 3-month postoperative period. An outcome analysis was done based on time to fusion, relief of pain with grip hold, and complications in the postoperative period. The patient has pain-free day-to-day activities wrist without affecting the grip strength and no implant-related or procedure-related complications noted in the postoperative period till the latest follow-up at 2 years as shown in Figure 4. 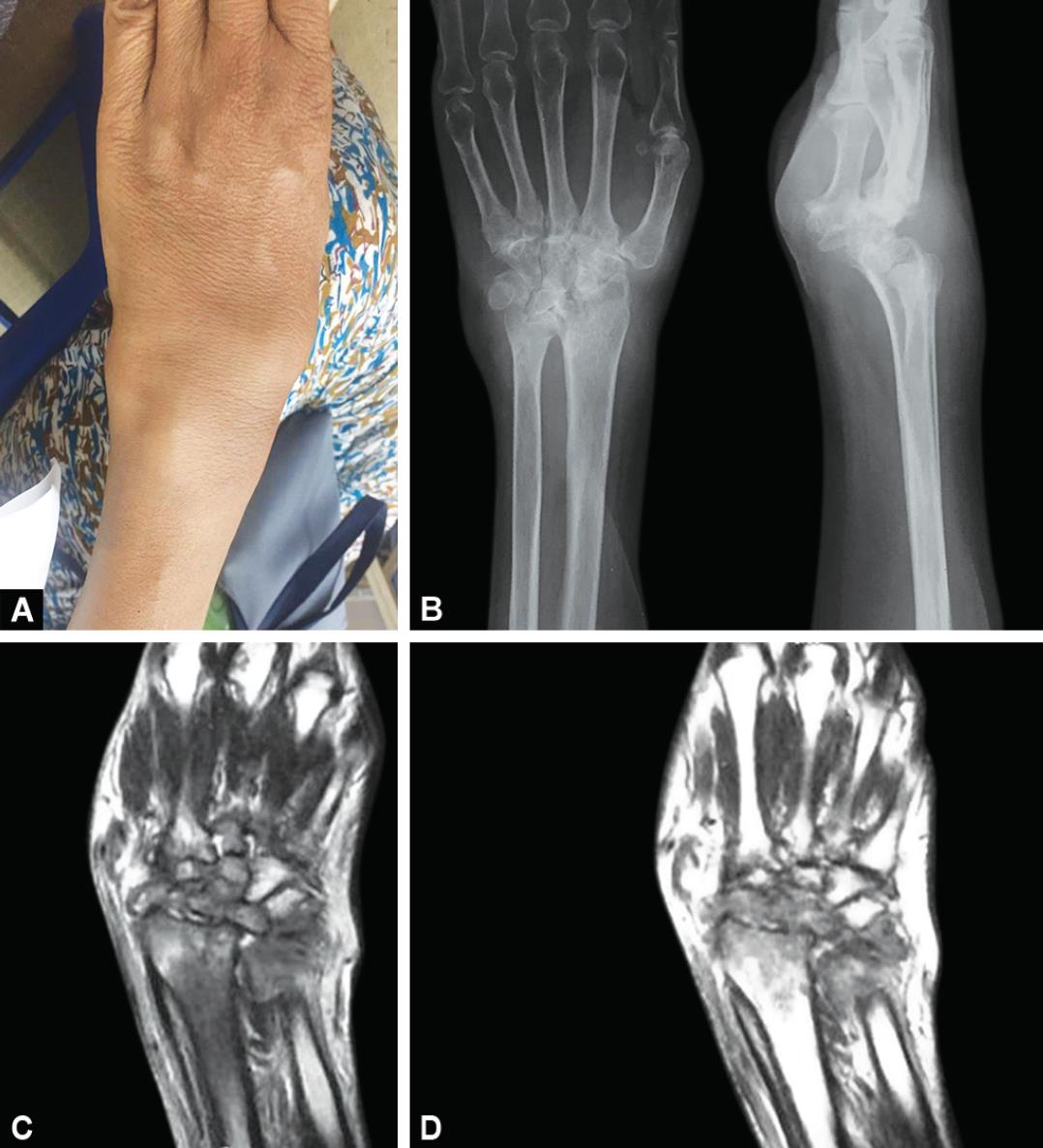 Figs 1A to D: (A) Clinical picture of the deformed wrist; (B) Preoperative radiograph; (C and D) MRI images with loss of signal intensity in the proximal row carpal bones

Fig. 2: Initial direction of entry of the K wire through the carpal bones into the intermetacarpal web space

Fig. 3: K wire being driven back with a mallet through the ulna autograft and into the medullary canal of the radius 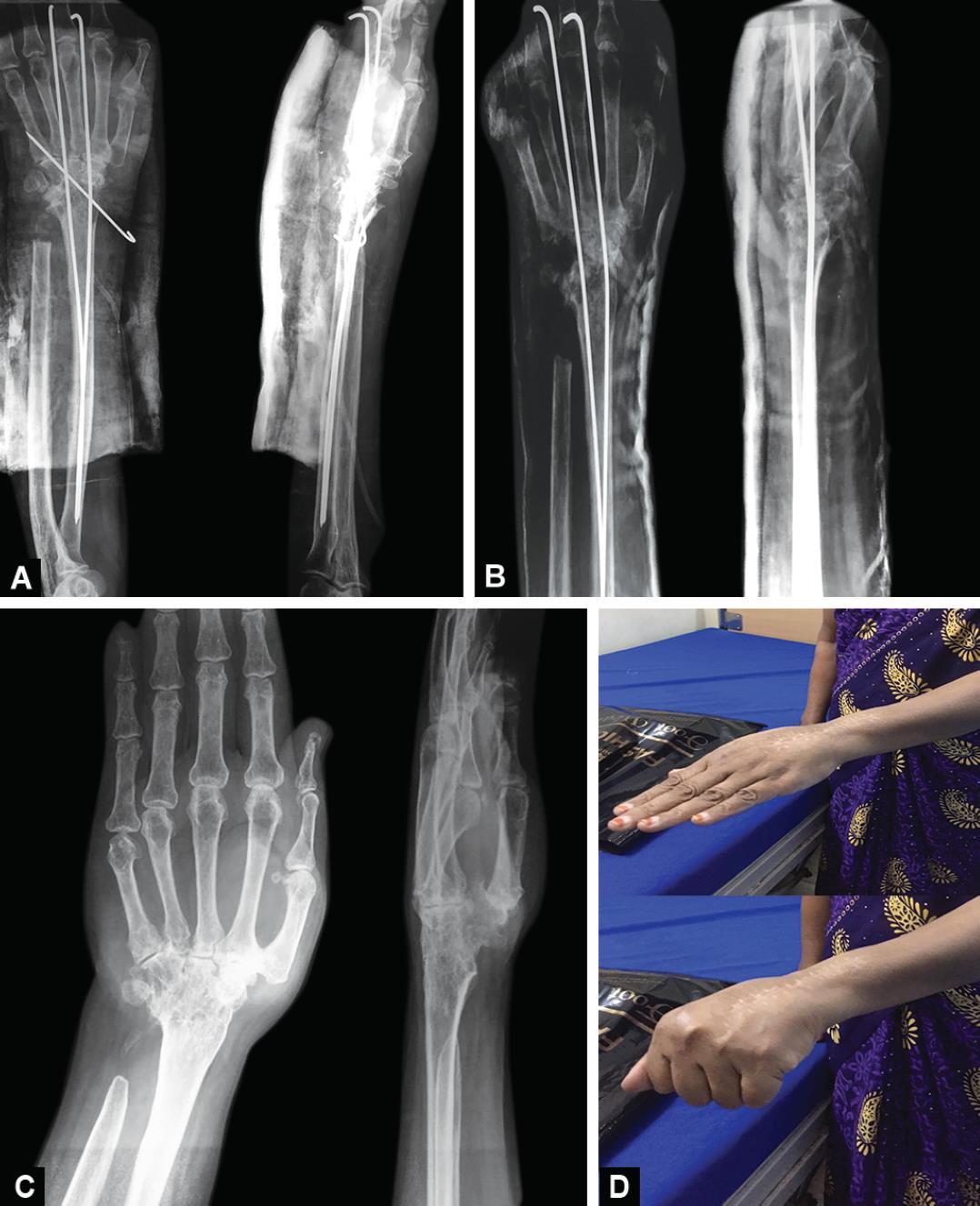 Irrespective of the method of fusion employed, any method that offers good apposition with stability at the fusion site and relief of pain is acceptable. The major problems with the rheumatoid wrist arthritis are thinned skin and atropic bone. Plate fixation will leave the implant prominent on the fragile skin, and removal becomes a necessary most of the times. Reported complications with similar procedures were nonunion of the fusion site, wound-related problems, neuroma formation, and painful retained hardware.13 Median nerve compression was as a complication with the intramedullary fixation caused by the volar edge of the distal end of radius during the correction of the subluxation of carpus.14 We did not encounter any of those in our case.

The ideal position for wrist arthrodesis is not clear. Clayton recommended a neutral position with about 10° ulna deviation.5 Larsson, however, reported slight extension, and ulna deviation increased the grip strength.15 On the contrary, Hinds et al. said that the position of fusion did not affect the grip strength or satisfaction.11 In our case, the position of the wrist could be changed by different degrees by bending the K wires after they had been introduced into the bone (Fig. 3). A similar technique was reported by Lee and Carroll.8 They described the combination of an intramedullary Rush pin and an iliac crest bone graft. They used a 3/32 Rush pin instead of K wires.

Although total wrist arthroplasty may be a more appealing treatment for the severely destroyed rheumatoid wrist, function may not be significantly better than for arthrodesis, and current evidence does not support the widespread implementation of this procedure.16–18

The major advantage of this method of wrist fusion by parallel K wires lies in its simplicity and prevention of the morbidity from iliac crest graft harvesting using local ulna autograft. Hardware-related complications are not encountered as in plating since wires were removed after union is achieved.