Aim: The aim of this study was to analyze the functional outcome of patients treated with PFN A-II using Harris hip score, at our institution. The study included 20 patients (11 males and 9 females).

Results: Among the 20 patients included in the study, outcome was excellent in 5, good in 11, fair in 4, and this is based on Harris hip score with the minimum follow-up period being 6 months. The average union time was 13 weeks, average Harris hip score was 82.3. An abductor lurch was reported in one patient, postoperative thigh pain in two patients, infection in three patients, and bedsore in three patients.

Intertrochanteric fracture is one of the most devastating injuries whose incidence increases with advancing age.1 These patients are more limited to home ambulation and become dependent for doing their basic and instrumental activities of daily living. Fifty percent of fractures around hip in elderly patients involves trochanteric fracture that are of unstable type. They are usually complicated with associated comorbidities such as osteoporosis, diabetes, hypertension, and renal failure. In such circumstances, nonoperative treatment is mainly reserved for poor medical candidates and nonambulant patients with minimal discomfort after fracture. Today operative treatment has largely replaced conservative measures and the goal is to achieve accurate or acceptable treatment. Anatomical and stable reduction was performed with rigid internal fixation in order to achieve early mobilization of patients and prevent complications of prolonged recumbence. Despite marked improvements in implant design, surgical technique, and patient care, intertrochanteric fractures continue to consume a substantial proportion of our healthcare resources and remain a challenge to date.2 Complications with intertrochanteric fractures arise primarily from fixation rather than union or delayed union because the intertrochanteric area is made of cancellous bones.3

The strength of the fracture fragment–implant assembly depends upon various factors including4 bone quality, fragment geometry, reduction, implant design, and implant placement. Among all these factors, surgeon can only modify the quality of the reduction, choice of implant, and its placement. A wide variety of treatment options are available for these fractures. The sliding hip screw device has been used for more than a decade for the treatment of these fractures, which may not be an ideal implant in all cases.5,6 Intramedullary load sharing device, namely, PFN, helps in early postoperative mobilization, weight-bearing, and ultimately the early fracture union. The proximal femoral nail antirotation II (PFN A-II) utilizes a helical blade instead of the conventionally used two screws. The helical blade is believed to provide stability, compression as well as rotational control of the fracture. Theoretically it compacts the bone during insertion into the neck and hence has higher cutout strength as compared to other devices. The differences are that the mediolateral angle is reduced from 6° to 5°. Hence, there is less chance of implant failure especially in elderly, osteoporotic bones. Thus, PFN A-II is a modification of the conventional PFN, which reduces even the minimal complications associated with conventional PFN and also provides additional advantages.

A prospective study carried out at the Department of Orthopaedics, Government Royapettah Hospital and Kilpauk Medical College, Chennai, Tamil Nadu, India. Twenty patients were studied (21 hips—one patient had bilateral trochanteric fracture). The patients consisted of 11 males and 9 females whose age-group ranged from 45 to 85 years. Right femur was involved in 10 cases, left femur in nine patients, and bilateral in one patient. Mode of injury was road traffic accident in 10 patients and self-fall in 11 patients. Patients were classified based on Boyd and Griffin classification, fracture, with type II being predominant and type I being least. The classification was done based on the preoperative anteroposterior view with traction and internal rotation taken at the time of admission. The trauma to surgery interval was 3–7 days.

All patients were operated on the fracture table under spinal anesthesia after the routine preoperative assessment.

Patients were evaluated clinically and radiologically at 3 weeks’ interval for the first 3 months and thereafter monthly for the next 3 months and bimonthly for the next 12 months. During follow-up, the Harris hip score was evaluated at 3 and 6 months postoperatively, and the functional outcomes based on pain, function, absence of deformity, and range of motion were also assessed using Harris hip score. Collection of data was per the proforma with consent from patients.

Bedsore occurred in three patients (one male and two female), superficial infection occurred in three male patients, which resolved with antibiotics, three patients had deep infection (two male and one female), which resolved with debridement and antibiotics, one female patient had abductor lurch, and in two patients (one male and one female) had postoperative hip pain. No cases of helical screw cutout, revision surgery, nonunion, or DVT were reported in our study.

The PFN A-II is an effectively designed intramedullary load-sharing device. It incorporates the principles and theoretical advantages of the Zicker nail, dynamic hip screw, and locked intramedullary nail, with modifications for Asian population.

Biomechanically PFN A-II, just like the conventional PFN, is more stiff and has shorter moment arm, i.e., from the tip of helical blade to the center of femoral canal, whereas the DHS has a longer moment arm but undergoes significant stress on weight-bearing and hence higher incidence of lag screw cutout and varus malunion. The larger proximal diameter (17 mm) of the PFN A-II compared with PFN (15 mm) gives additional stiffness to the nail. Minimal blood loss, shorter operative time, early weight-bearing, less chances of implant failure, minimal fluoroscopy time, easier helical blade insertion (compared with cumbersome lag screw and derotation screw), less chances of postoperative hip pain, and better performance than any other implant in elderly osteoporotic patients are all the advantages of PFN A-II.

The average blood loss in patients treated with the PFN A-II nail was 130 mL, ranging from 50 to 275 mL. The results were comparable with Karapinar et al.’s study7 (Table 1). 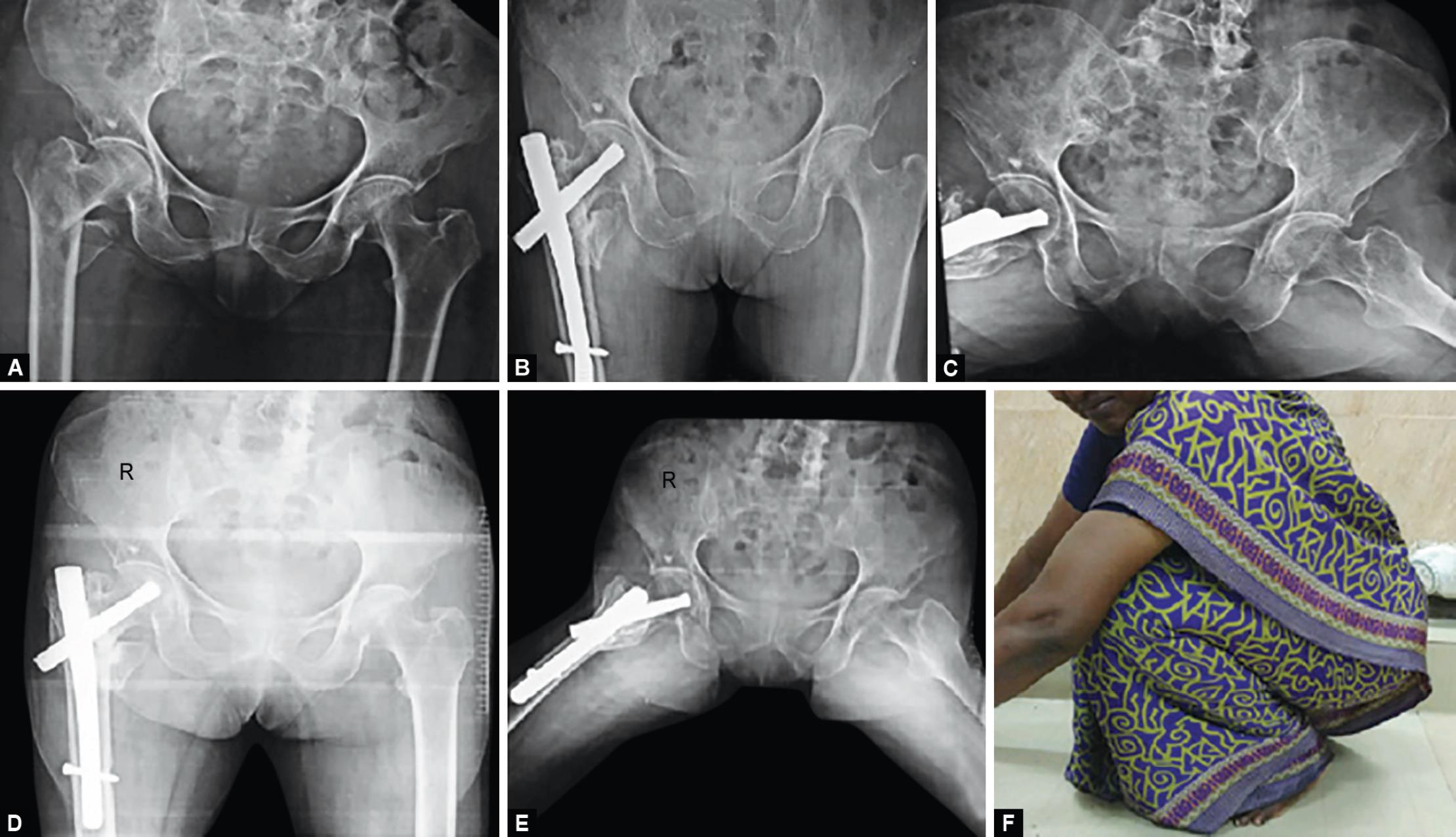 Figs 1A to F: Case 1 illustrations

Figs 2A to D: Case 2 illustrations

Figs 3A to D: Case 3 illustrations

Results were comparable to the series of Zhang et al.8 and Zhou et al.9 (Table 2).

The use of image intensifier was 13.5 shots in patients treated with PFN, which was comparable with the above-mentioned studies. In our study, it ranged from 8 to 20 shots. Fluoroscopy was more needed in types III and IV Boyd and Griffin classification.

Figs 4A to E: Case 4 illustrations

In comparison, even other studies mentioned above have higher exposure fluoroscopy and greater blood loss in types III and IV of Boyd and Griffin (Table 4).

The complications in our study included bedsores, superficial and deep infections (which settled subsequently with intravenous antibiotics and debridement, respectively), abductor lurch, and postoperative hip pain. These were also present in other studies of PFN A-II.

A major complication of screw cutout was reported in few cases of other studies. Two cases of helical blade cutout (out of 42 patients) was reported by Karapinar et al.7 Our study did not report any complications of screw cutout or revision surgeries, because in our study all helical blades were placed per the tip apex distance as mentioned by Baumgaertner et al.11 Yet, our sample size is inadequate to report this complication.

Preoperative and postoperative femoral fractures have been documented in patients treated with PFN and PFN A-II. Multiple factors have been implicated such as implant design and operative technique. Decreases in implant curvature, diameter, over reaming of femoral canal by 1.5–2.0 mm, insertion of implant by hand and meticulous placement of the distal locking screws without creating additional stress decrease the complication rate of femoral shaft fracture (Schipper et al.).12 Patients with narrow femoral canal and abnormal curvature of the proximal femur are relative contraindications to intramedullary implants (Halder et al.).2 Since these recommendations were followed in our series, we did not encounter any preoperative and postoperative femoral shaft fractures. A larger cohort of patients is necessary to document the incidence of preoperative and postoperative femoral shaft fractures, which is a limitation of our study.

In short, the PFN A-II is a better implant with specific design superior to conventional PFN and also with distinct advantages over other implants to treat intertrochanteric fractures. With adequate surgical technique, the advantages of the PFN A-II increase and the complication rate decreases.

Intramedullary nailing with the PFN A-II has distinct advantages over conventional PFN or DHS, such as shorter operating time and less blood loss for elderly, osteoporotic unstable trochanteric fractures.

Early mobilization and weight-bearing are allowed in patients treated with PFN A-II, thereby decreasing the incidence of bedsores, uremia, and hypostatic pneumonia.

The operative time is much lower compared with other procedures, which also contributes to less blood loss.

The incidence of postoperative femoral shaft fractures and nonunion rates in PFN A-II can be reduced by good preoperative planning and correct surgical technique, adequate reaming of the femoral canal, insertion of implant, and meticulous placement of distal locking screws.

The PFN A-II is a significant advancement in the treatment of trochanteric fractures, which has the unique advantage of closed reduction, preservation of fracture hematoma, minimal soft tissue damage during surgery, early rehabilitation, and early return to work.